Today is Big Board Game Day here at St. Catherine’s Primary School. Here we are wearing our favourite colours playng our favourite board games, all in aid of a great cause, the NSPCC. Together we managed to raise £152. Well done everyone! 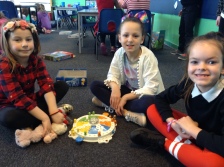 This term Primary 3 have been learning about telling the time and this afternoon they welcomed parents, grandparents, aunties and sisters into school to see how they have been learning in class. Everyone took part in different activities with the children from making cut and flap clocks, telling the time lotto and digital/analogue games. We started off by teaching the visitors our Clock Rap and some of the children led us in this. Using different voices like angry, posh or silly made everyone laugh.Here is Olivia leading us in silly voices.

Everyone went home with a bag full of resources for helping to support learning in telling the time. We also launched our Design a Clock Competition – the children are excited about transforming their clocks using their creativity and imaginations. Watch this space for entries in a few weeks time. Thank you to all those who were able to come along and support their child for this event. 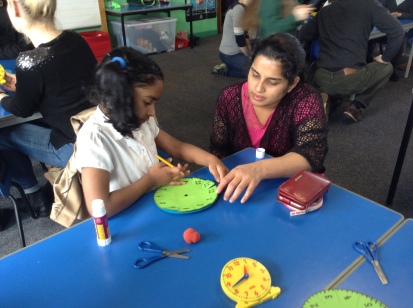 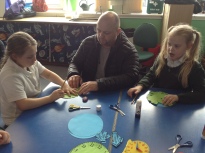 Yesterday Primary 3 had an exciting visit to the National Museum of Scotland for a time travelling adventure back to Viking times, 1200 years ago. Their Viking day out began in the theatre where they learned about Viking life in the Orkney Isles. Next they were able to look around the galleries, study a Viking grave and try on some clothing.

Next they moved on the a handling session where each child was able to explore different Viking artefacts. The children really impressed Miss McGregor with all their knowledge, thoughful questions and ideas about some of the interesting pieces.

Finally, after lunch, there was time to investigate some of the other galleries in the museum before heading back to school. Can you spot which one of us was wearing an astronaut suit and who is driving the race car?

Today we had our class of the term treat.  We came to school dressed in our pyjamas and watched Trolls with popcorn.  Last term we managed to win class of the term by getting high class of the week scores to win trophies for our door. We need to follow the Golden Rules and the class rules to stay on the sunshine to keep a high score! Hopefully we will be able to get our first trophy on our P2 door soon for term number 2!

It’s maths Week Scotland this week and P3 have been learning about the wide range of jobs that use maths skills. The class had lots of ideas themselves and found out about some more unusual career options as well. They have lots of aims and ambition for their futures and know how important it is for them to learn in numeracy and mathematics.

Have you heard of the Edinburgh School Uniform Bank? This organisation aims to help children in schools by providing school uniforms to families in need of financial support.

“… we started a school uniform bank to help children and young people affected by poverty have the start they need for a good education. We aim to promote pride, dignity and self-esteem in children from families experiencing financial hardship in Edinburgh by providing good-quality school uniform and other clothing, equipment and supplies required for the school day.”

They are also looking for volunteers and donations.

Lots of fun and games at St Catherine’s Primary this morning. We all dressed up in our favourite colours and worked on our social skills playing board games together. What a competitive bunch we are…and I’m talking about the staff there! Fantastic that we also raised £150 for NSPCC, a worthy cause. 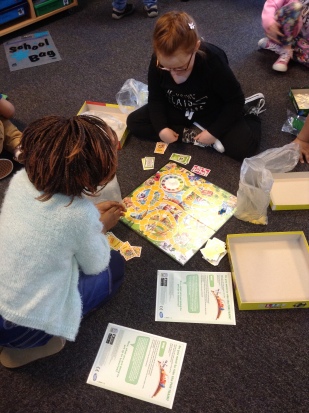 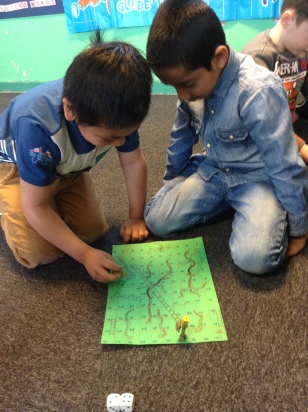 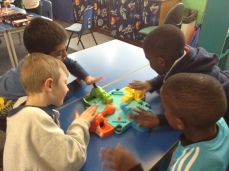 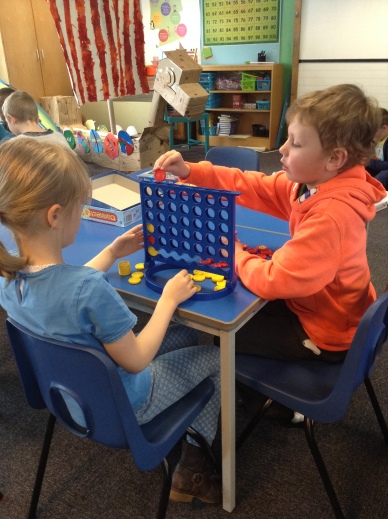 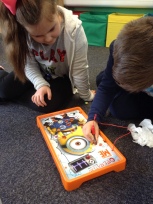 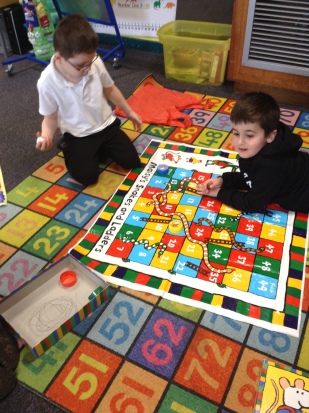 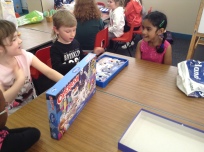 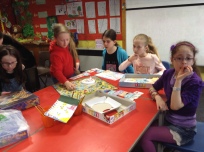 Yesterday, we were visited by representatives from Hibernian Football Club and they brought with them the Scottish Cup.  Did you know that the Scottish cup is the oldest football trophy in the world?!

The visitors asked us what the Hibs’ motto is.  After a few good guesses (‘Sunshine on Leith’ and ‘Super John McGinn’) they explained that it is PERSEVERED.  They talked about what it means to persevere and how Hibs had to keep trying for 114 years before they won the cup.  They told us about the Hibs player, Darren McGregor, who had dreamed of playing for Hibs since he was at primary school.  He had lots of setbacks and injuries  but never gave up on his dream and he eventually signed for Hibs when he was 30 years old. At the end, we were told that the Scottish Cup had also visited Hibernian fans, Andy and Jamie Murray.  Two Scottish athletes who have persevered to be the best tennis players in the world.

We learned that, throughout life, it is important to work hard, persevere and never give up on your dreams!

Each class got their photo taken with the Scottish Cup.  You can look at these by following the attached link : St. Catherine’s Scottish Cup photos

Come and join the celebration!

On Monday, 6th June, we will be celebrating St Catherine’s RC Primary School’s 50th anniversary! We will be updating soon about activities and celebrations, some presented by our current pupils.

Watch this space for more information to come.

We are looking forward to celebrating with you!

On Wednesday we were honoured to invited HRH Duchess of Cambridge to visit us at St Catherine’s. The Duchess was here to see how Place 2 Be works in a school and how it supports the whole school community.

She was greeted by St Catherine’s pupils. Two gave her a bouquet of flowers, two presented her with a quiach cup of friendship, while the rest of the school welcomed her with a song.

Mr Hunter invited the Duchess of Cambridge to join in with the actions as we sang “Welcome Everybody”. She did very well getting a hang of the actions!

We were thrilled to host our royal visitor! We could not be more impressed with the warm welcome given by our pupils across the school. We had an unforgettable day!

Enjoy some of the photos from this exciting event!