Primary 4 ventured outside this morning to practise finding right angles. Our challenge was to create a picture with as many right angles in it as possible, using only sticks.

We had a lot of fun getting creative with our stick pictures!

We then tried our marvellous creations which were surprisingly tasty!

In George’s Marvellous Medicine, Grandma grew very tall when she had the medicine.  After writing up the recipe for the medicine, we drew pictures of what would happen to anyone that ate our medicines.  Some of the side effects included turning into a rainbow banana, becoming a talking dog, turning green, start breathing fire and turning blue!

Primary 4 were put through their paces in training for the Roman Army this week. We had a fantastic afternoon learning about what life was like for soldiers in the Roman army.

We learned lots of facts about the structure of the Roman army and had the chance to try on some pieces of armour and clothing. The armour was extremely heavy and this made us think about just how tough it would have been for soldiers marching for hours at a time in the time of the Roman Empire.

We learned that the shields that the Roman soldiers would have used were extremely useful for both defending and attacking because it protects almost your whole body at once – we had the chance to test this out by trying to “stab” Joe, our Roman reenactor, with a sword, but he was far too quick with the shield!

Joe brought lots of Roman artefacts with him that we were able to have a look at. One big discovery we made was that the Romans didn’t have toilet paper, but instead used a sponge on the end of a stick that would be dipped in water while at the communal toilets – we’re certainly glad things have changed now!

The highlight of the afternoon was getting to practise some Roman battle formations. To help us march in time, we shouted “Sin, Dec, Sin, Dec” in rhythm with our feet. The whole class used their shields to create the Turtle formation. This was used by the soldiers when their opponents had archers. By the end, we found that our arms were starting to get very tired from carrying the heavy shields for so long!

In St. Catherine’s we love books and authors! We are delighted to announce that Primary 4 -Primary 7 will be receiving a visit from the award winning author Mark Smith in October. Yay!

Q: What do the following pictures have in common?

A: Well they are all connected to Mark’s brilliant new book titled ‘Slug Boy Saves the World’. Read on for more information:

Thanks to an unfortunately tasty-looking radioactive garden slug, eleven-year-old Murdo McLeod is now the world’s worst superhero. His two powers are pretty unique: the first is sliding up walls. Quite slowly. The second is secreting slippery slime from his skin. (Yes, just as disgusting as it sounds.)
Now, Slugboy has to use his not-so-super and oh-so-gross abilities to save the world. Let’s hope he doesn’t slip up.

This week Primary 4 went to visit the National Portrait Gallery. Here is what a P4 said about it:

On Tuesday, 6th of June 2017, Primary 4 went on a lovely class trip to the National Portrait Gallery.

When we got there we went into the main area and met our tour guides. They were called Katherine and Moana. They told us to lie down on the ground! All of the children were bewildered but when we lay down we studied the stunning stars on the roof and the zodiac people painted on the balcony. Then we split into 2 groups. My group went upstairs and studied a painting. We got to learn more about it.

Then we got a clipboard and pencil each, and were told to draw a painting and our partners without taking our pencils off the paper or looking at the paper. This was really funny because when we looked at our piece of paper nothing was on the body. I’ve heard that the other group did something similar.

Next we went to have a little snack from our packed lunch boxes. Then we went to our workshop. We chose our partners and were told to go to a table and we created lots of different pictures using different materials.

During Art, Primary 4 produced some Symmetrical heart mosaics for Valentine’s day. We found out that the floors and walls of Roman buildings were often decorated with mosaics – tiny coloured stones (tesserae). Many mosaics showed scenes of history and everyday Roman life.  Rich Romans decorated the floors of their main rooms with elaborate and detailed mosaics to show off their wealth and importance.

We used coloured card, felt and metallic paper to create our wonderful designs and worked carefully to ensure that our designs were symmetrical on both sides. We hope you enjoy the results!

Primary 4 had an unexpected visitor from a Roman soldier. Fortunately he was a Roman reinactor from the Antonine Guard called Joe and he came in peace!

Firstly Joe showed us some images of other Roman reinactors dressed as Roman soldiers and explained their duties. We even had a mini quiz to test our Roman knowledge.

After that some of the children fought with Joe and pretended to be Barbarians. The aim of the game was to tap Joe with our wooden sword whilst keeping our shields up to protect ourselves. The scutum (Latin name for shield) was curved and very big so it was almost impossible to tap Joe. Kacper though, managed to strike him on the foot!

Afterwards we got to look at and wear some of the Roman artefacts. These included an oil lamp, a water bottle, a strigil, chain mail armour, an arm protector and sandals. There were two pairs of sandals. One pair was open toed and the other pair was enclosed. I particularly enjoyed rubbing my arm with the strigil because it felt nice and smooth.

Finally we went to the gym where we practised some battle formations. My favourite formation was the turtle. As we marched we shouted ‘Sin dec, sin dec’ just like the Romans so we could march in time.

Before Joe left he gave us all certificates to say that we had passed our Roman army training. The certificates also told us our Roman names. I hope you enjoyed our blog.

Blog Post by : Alice as part of Big Writing.

Find out more about the Antonine Guard

Today, Primary 4 received a visit from a Tesco ‘Farm to Fork’ trail representatives as part of their healthy eating topic. They were tested on their knowledge of different fruits and vegetables and were shocked to learn that tomatoes and cucumbers are actually classed as fruits and not vegetables!

P4 were then involved in helping to make their own ‘rainbow salad’ wrap using a variety of colourful, healthy foods. Some children were feeling adventurous and tried ingredients for the first time like spinach & cress, much to their enjoyment!

The children loved being able to make and then try their own food, especially knowing how healthy their creations were. 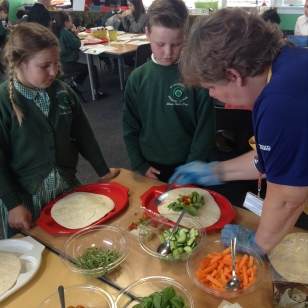 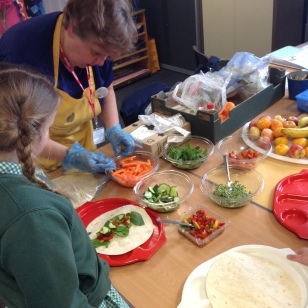 Thank you so much to everyone who came along to the Primary 4 Reading for Enjoyment Event and helped to make it a success. The pupils were delighted to be able to share their favourite books with you and to work on some joint reading activities. Great to see some younger siblings enjoying story time with their older brothers and sisters too!